With the development of physical distribution, posting letter is increasingly less used. So the postage stamps are also gradually loss its position in physical distribution. Now they are loved by stamp collecting lovers. The Chinese postage stamps usually marked with exact value. People need to pay the equal amount of money to the post office according to the marked value of the stamps. 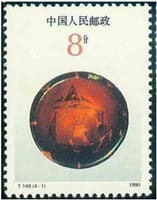 It is actually a cover of baby coffin. Banpo Museum is built on the situ of a village ruins which existed 5000-6000 years ago. The village belongs to matriarchal society. Due to the bad living condition, many babies died before they grew up. People at that time believe their babies’ soul will be endangered if their bodies were buried far from their home. So their parents put the dead babies in baby coffins which were made in shape of earthen jar. And the pottery basin above are the cover of the coffin jars. If you can see the real item, you will find there is a hole on it. It is opened for the babies’ soul going out and coming in the coffins. 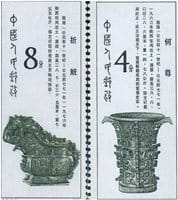 Zhegong (折觥) and Hezun (何尊) are both wine wares from the West Zhou Dynasty (11th Century BC – 771BC). Zhegong was unearthed in Fufeng County, Shaanxi Province in 1976 and Hezun was unearthed in Baoji, Shaanxi in 1963. Baoji area is called hometown of bronze ware. And Fufeng is the origin place of Zhou Dynasty. Now they are both collected in Shaanxi History Museum. 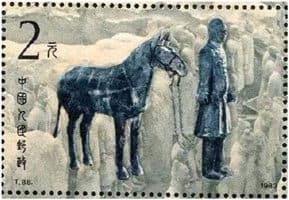 Terracotta Warriors and Horses is the best known relics in Shaanxi. It is the symbol of Shaanxi Tourism. It is also one of the top attractions in China and all over the world. It is also the things of Xian that appear on postage stamps most frequently.

Zhang Qian – Pioneer of Silk Road. Zhang Qian (164BC-114BC) was born in Hanzhong, Shaanxi. He is the outstanding diplomat, traveler, and explorer of the West Han Dynasty (202BC-8AD). He traveled on the Silk Road for two times and spread Chinese culture to nations living in mid and western Asia. After he passed away, he was buried in his hometown, Hanzhong.