Have you been dreaming of traveling to Zhangjiajie for a long time? On this 5 days tour, you will explore the highlights of Zhangjiajie with the company of accommodating guide and driver. They will take good care of you, and you don’t need to worry about navigating the large forest park without understanding a word of Chinese. Just join us to have an once-in-a-lifetime traveling experience. In this 5 days wonderful tour, you will visit the most beautiful scenic spots in Zhangjiajie: fantastic peaks, clear water, dense forests of the original natural scenery. Take the opportunity to visit the World’s longest and highest glass-bottomed bridge and the highest elevator.

*Discover the wonderland of Zhangjiajie National Forest Park.
*Enjoy the picturesque landscape in Golden Whip Stream and listen to the fairy tale of this place.
*Appreciate Baofeng Lake, known as the “Classic lake of the World”.
*An exciting adventure to Zhangjiajie Grand Canyon.
*Challenge yourself from the 999-step to the amazing Tianmen Cave.
*Marvel at the highest elevator in the world to appreciate the beauty of Zhangjiajie—Bailong Elevator. 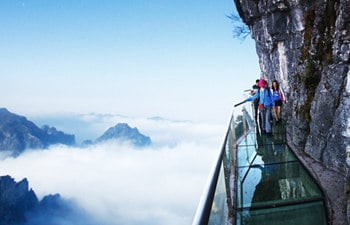 6 Days Zhangjiajie-Fenghuang Private Tour for Nature & Culture Beauty
Have you ever heard the breathtaking nature of Zhangjiajie? You may have seen a lot of beautiful places on this planet, but Zhangjiajie definitely will take your breath away. It’s one of the great places to admire nature in China and have different charm in every season. The amazing Avatar Mountain, serene valley, unusual…