Fanjing Mountain, located in the central part of Tongren, northeastern Guizhou Province, is a stunning mountain for its original ecosystem, various wild lives, and Buddhist sites. Listed as a natural nature reserve and world natural heritage of UNESCO, there is a great variety of rare wild lives. With a forest coverage of 95%, Fanjing Mountain is regarded to be the Oasis on Earth. It’s also a well-known Buddhist mountain with many temples, inscriptions on precipices, a giant sitting statue of Maitreya, and so on. The name, Fanjing, has also a Buddhist connotation, which implies Pure Land Created by Nature. 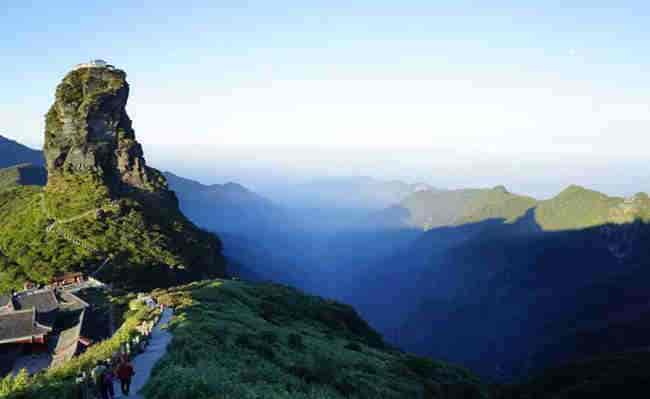 Fanjing Mountain has a pleasant climate in all seasons. The best time to visit the mountain will fall in summer and autumn, probably from June to November. In summer from June to August, Fanjing Mountain becomes a popular summer resort. With the rushing waterfalls and dense shades of the forest, it’s a perfect place to avoid the intense heat. You can also go drifting along the Taiping River there. In autumn with the cool weather, it is a magnificent world with red fall foliage all over the mountainside. Even so, the colorful spring flowers and snow landscapes are also worth a visit.

What to See at Fanjing Mountain? (Best Highlights)

You must have seen the pictures of the miraculous Mushroom Rock on the summit of Fanjing Mountain, even you have never been there. The mushroom-shaped rock has an approximate height of 10 meters (32.8 feet), and it’s quite famous for its fantastic appearance. It is like a tough mushroom growing from the earth, also like a magical stone down from Heaven. Can you believe that the Mushroom Rock has stood there for billion years? That’s true. Standing by the rock, you can overlook the mountain, with the sea of clouds as well. Red Cloud Golden Summit is considered as the treasure basin of Fanjing Mountain, for the amazing landscapes as well as cultural sites there. It is a splendid location to see the imposing sea of clouds, which makes you feel like in a fairyland. The Light of Buddha is another expressive view of Red Cloud Golden Summit. In the clouds to the sun, a colorful aureole would appear, with an indistinct figure inside. This marvelous natural phenomenon usually is found in the morning after rains. A Fairyland with Diverse Wild Fauna and Flora

There are varieties of wild lives on Fanjing Mountain, which makes it beautiful and attractive. The extensive land is covered with thick forest, where is the home to more than 2,000 species of plants and over 800 kinds of animals, such as the endangered Guizhou golden monkeys and the protected Chinese dove trees. Thus the mountain is also called the Wildlife Gene Bank. Guizhou golden monkeys, known as the elves of Fanjing Mountain, are unique creatures at local. You will see many towering trees, which you can just get your arms around the thick trunk.

Famous Buddhist Mountain with Many Temples

Fanjing Mountain is listed as one of the five most famous Buddhist mountains in China. Even Buddhism had been spread around the mountain area long before, it began to thrive there until the Ming Dynasty (1368 – 1644). Fanjing Mountain is of Maitreya for Buddhists, and there is a giant golden sitting statue of Maitreya Buddha at Longquan Temple at the foothills. It is an open-air statue made of pure copper, as well as the largest one in Guizhou.

You will meet a number of temples here and there, as it is said there are hundreds of small and large-scaled temples around the mountain. Huguo Temple and Cheng’en Temple are the largest ones there, as the imperial temples in ancient times. In addition, inscriptions on the cliffs and steles about the establishment and reconstruction of these temples can be found. If you like Chinese arts especially calligraphy, the inscriptions cannot be missed.

For the thriving Buddhism, many tourists go there for blessing. You can follow them to pray for good fortune in business, love, study, wealth, health, giving birth to a child, and so on.

How to get to Fanjing Mountain

There are tourist buses to Fanjing Mountain from Tongren South Railway Station and Tongren Fenghuang Airport. It will take you 1.5-2 hours for a single trip, and the price might be 50-60 RMB.

From Tongren South Station, the bus departs at around 9:30 in the morning and 15:00 in the afternoon.