Pingyao is a typical northern city in China with history over 2700 years, sharing the title “Four Best Preserved Ancient Chinese Cities” together with Langzhong in Sichuan Province, Lijiang in Yunnan City and Shexian of Anhui Province. Started to be built in Western Zhou Dynasty (827BC-782BC) and extended in 1370 AD, Ming Dynasty, the basic layout and architectural landscape featured of Ming and Qing Dynasty is well preserved today and listed as World Cultural Heritage by UNESCO in 1997. Pingyao had ever governed China’s finance in Ming and Qing Dynasty with over 20 exchange shops (functioned partly as bank in ancient time) headquartered here, about the half of the whole country, gaining the title of “Ancient Chinese Wall Street”. Today, you can still find the basic look of its ever prosperity from the relics of the Ancient City Wall, Ancient City Wall, Ming-Qing Street Wang, Family Courtyard…

How Do I Plan My Pingyao Tour?

A Pingyao day tour to look around the ancient town with the City Wall is doable if you only have one day. Usually, most travelers tend to stay overnight here with the accommodation in ancient style hotel inside the town to discover fulfilling experience about history here.

With high speed trains of Pingyao opened in late 2019, Pingyao is well connected with other popular destinations like Beijing, Xian, Datong and Taiyuan to enrich people’s China travel experience. Pingyao, a real antique city with thousand years’ history, connected with Xian by 3.5-hour high-speed train, is one of the best choices for tourists who are looking for Xian side trips. This 2days tour including the charming Pingyao Ancient Town, the grand Wang Family Courtyard as well as the… Pingyao is one of the only two ancient cities in China that has successfully declared its entire ancient city as a world cultural heritage, and is known as one of the “four best-preserved ancient cities”. Take this 3 Days Pingyao Discovery Tour to explore the best highlight attractions including…

Shanxi is a mysterious place full of history, culture, religions, traditions, etc. In order to make your visit here memorable, we designed this 5 days tour to offer all the highlights in Shanxi. Start from Datong, you will be guided to visit three UNESCO World Heritage Sites: Yungang Grottoes… This 10 days Chinese culture experience tour departing from Xian, going through Shanxi Province with Pingyao and Datong, ending in Beijing, brings you a true exploration of Chinese culture and ancient civilization. Taking high-speed trains as the main transportation will not only low your cost down but also bring…

Where should I go in China for the second or third-time visit? This 5 days Shanxi essence tour inspires you an ideal journey to explore Pingyao, Taiyuan, and Datong and discover the profound history/civilization of Northern China! Covering Qiao Family Courtyard, Pingyao Ancient Town, Jinci Temple, Hanging Temple, and… The 4 days Datong and Pingyao tours provides a brilliant itinerary covering all the highlights of the 2 cities to disclose the secret of Northern China's history and culture. From the remarkable Yungang Grottoes to the marvelous Hanging Temple, from holy Shanhua Monastery to the splendid Qiao Family Courtyard...What…

This 2 days Datong Pingyao tour brings you a pure culture exploration of Yungang Grottoes, Hanging Temple, and Pingyao Ancient Town. Immersing into the thick atmosphere of Chinese ancient grotto culture, Buddhist culture, Taoist Culture as well as the commercial history in Ming and Qing Dynasties. With an excellent… Looking for good side trip nearby Beijing? Pingyao, linked with Beijing by 4-hour high-speed train definitely would worth your visit! This 6 days tour departing from Beijing, including Forbidden City, Temple of Heaven, Mutianyu Great Wall, Beijing Hutongs, Qiao Family Courtyard as well as Pingyao Ancient Town, will bring…

This tour departing from Beijing, including Pingyao Ancient Town, Qiao Family Courtyard as well as the amazing Shuanglin Temple, is designed for tourists who are looking for best Pingyao tour but with limited budget. Taking the round way overnight train will definitely low your cost down! 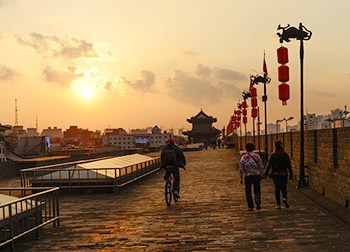 Pingyao, reputed as the center of Shanxi Merchant Culture in Mid-Ming Dynasty, is a not-to-miss place for any history-seekers. This tour departing from Xian, including Terracotta Warriors and Horses, Ancient City Wall, Shannxi History Museum, Big Wild Goose Pagoda, Pingyao Ancient City and Qiao Family Courtyard, will take you…

Pingyao, a real antique city with thousand years’ history, connected with Xian by 3.5-hour high-speed train, is one of the best choices for tourists who are looking for Xian side trips. This 2days tour including the charming Pingyao Ancient Town, the grand Wang Family Courtyard as well as the…