Qiao Family Compound is located in Qiaojiabao Village, Qi County, Shanxi Province, and is about 54 km away from Taiyuan and 40 km away from Pingyao Ancient Town. It is also called “Zaizhongtang”. It’s the former residence of Qiao Zhiyong, a nationally renowned financier of the Qing Dynasty. It was originally built in the Qianlong era of the Qing Dynasty, and was renovated and enlarged many times. With the continuous efforts of several generations, the compound has turned into a magnificent complex which perfectly summarizes the unique style of northern Chinese residences in the Qing Dynasty. This fully enclosed castle-like building, covering an area of ​​​​4,175 square meters, is composed of 6 large courtyards and 20 small courtyards with a total of 313 rooms. It faces streets on three sides and is not connected to the surrounding dwellings. It is surrounded by brick wall, more than 10 meters high. Looking down from high above, the whole complex looks like two Chinese characters “喜喜” which mean double happiness. Its exquisite design and excellent craftsmanship fully show the superb construction techniques of Chinese people. It is praised by experts and scholars as “a bright pearl in the history of northern residential architecture”. There is a saying, “if you want to see royal buildings, the Forbidden City will surely satisfy you; if you are interested in residential buildings, Qiao Family Compound is definitely an ideal place for you”. In 1985, the Qi County government established the Qi County Folk Museum based on this ancient house and on November 1, 1986, the museum was officially open to the public. There are more than 5,000 pieces of precious cultural relics which features the customs in the Shanxi Jinzhong area, including farming customs, life etiquette, food, clothing, housing, transportation, commercial customs, and folk crafts. Visitors also have chance to see special exhibits on the history of the Qiao family, all kinds of treasures and films about the family. If you ever have chance to visit Qiao Family Compound, the following three pieces definitely should not be missed.

Ten Thousand Man Ball
There is a mercury glass ball hanging from the ceiling. It is said that the family bought the ball from the United States. One can see greatly reduced images of people on the ball. Back then, the ball was used to monitor the people in the house when they discussed business. It could be called the world’s first surveillance probe which was extremely rare at that time.

Rhino Looking Moon Mirror
The mirror is a piece of first-class national cultural relic and also the treasure of the family. It has three parts. The upper part is a mirror representing the round moon. In the middle is auspicious clouds, and a rhino serves as the base. This is how the mirror gets its name. It not only looks beautiful with unique shape but also has high practical value and ornamental value, which makes it a rare treasure. Nine-dragon Lantern
When the Empress Dowager Cixi fled to Xi’an during the siege of the international legations, the Qiao family donated 300,000 ounces of silver in time of need. Cixi rewarded the family two nine-dragon lanterns for its loyalty. There is no third such lantern ever found throughout the country. 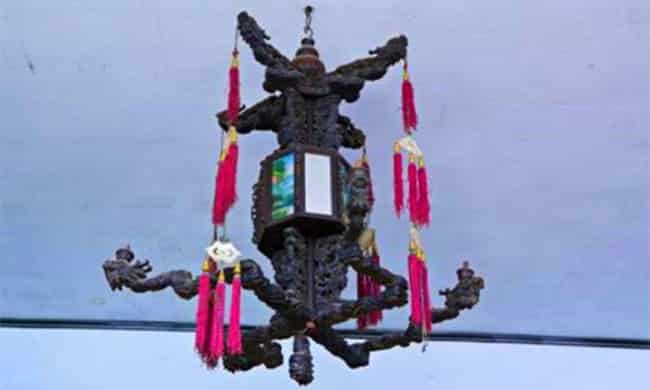