The Meaning of AM and PM and Other Interesting Stuff

We use many abbreviations in our daily life, but do we really know what they stand for? Imagine you will visit Xian this December and decide to book an airport pick-up service online. You provided the travel agency with the arrival time of your flight like 8:30 am on December 25. So the question is do you know the exact meaning of the initials am and pm?

Actually, am and pm come from Latin like many other English words: am stands for “ante meridiem”, meaning “before midday/noon”, and pm stands for “post meridiem”, meaning “after midday/noon”. The 24 hours of a day are divided into two equal periods according to the 12-hour clock format, am denoting the first 12 hours from midnight to noon and pm the second 12 hours from noon to midnight. Nowadays most countries across the globe adopt the 24-hour system, but some countries, such as the United States and Australia, use the 12-hour system.

Have you wondered which abbreviation should be used for noon and midnight? This is one of the most confusing things about the 12-hour system because neither of them can be considered as am or pm. To avoid confusion, many authoritative websites recommend using 12:00 noon and 12:00 midnight.

Speaking of the 12-hour system, there was a similar time system in ancient China, called 12 two-hour periods. As you might expect from the name, one hour at that time was equal to two hours today. The 12 periods were named after the 12 terrestrial branches, i.e. Zi, Chou, Yin, Mao, Chen, Si, Wu, Wei, Shen, You, Xu, and Hai. 11 pm to 1 am of the next day is the period Zi, 1 am to 3 am is the period Chou, 3 am to 5 am is the period Yin, and so forth. Ancient Chinese people even related the 12 two-hour periods to health preservation. Each period corresponds to one of the 12 channels of the human body. For example, it is believed that your liver detoxifies your body from 1 am to 3 am, so that if you are still awake in this period, you know what happens next.

Legend has it that ancient Chinese people named each period based on the time when the 12 Chinese zodiac animals are out and about. As rats usually run around between 11 pm to 1 am, so the period Zi is associated with rats and the beginning of a day. Rat also ranks first in the 12 zodiac animals. And rabbits like to go out of their holes for grass with morning dew on from 5 am to 7 am, so the period Mao is linked to rabbits. That’s interesting.

We are now living in the modern society. It’s so easy for us to know what time it is. We can check our watch, mobile phone, and computer. Then how did the ancient people keep time? You will be surprised by the wisdom of ancients. Ancient Chinese people invented plenty of instruments to tell time including gnomon-and-ruler, sundial, clepsydra, armillary sphere, water-driven astronomical clock tower, and sand clock. Take clepsydra for example. This invention was inspired by water seeping out of the cracks on pottery.

First, a small hole needed to be drilled at the bottom of a pot. The water in the pot flowed through the hole, and another container that had a pole with scales at its center was there to hold the water. As more and more water flowed into the container, the little bamboo chip or wooden block attached to the pole would hold the pole floating on the water. The pole would go through the small aperture on the lid of the container, and people could have the time by looking at the pole. Later, the ancients found that the more the water in the pot, the faster the water flowed, and the less the water, the slower the water flowed, which obviously affected the accuracy of the measurement. So more pots were used, as shown in the picture below.

Because not everyone could have such a complex device, the ancients had to think of other ways. Thus, bell towers and drum towers were built to give people time in ancient China. If you didn’t already know, there are magnificent Bell Tower and Drum Tower at the very center of Xian. They are more than 600 years old now and have become landmarks of Xian. Be sure to visit the Bell Tower and Drum Tower on your Xian tours. They look spectacular especially in the evenings with lights on.

Usually, bell towers were located in the east and drum towers in the west, and bells rang in the morning and drums at dusk. Bellmen had to watch the clepsydra so they couldn’t rest at night. For poor villages, bellmen just watched incense burning. They beat a clapper or gong to remind people what time it was five times a night. If you are a fan of Chinese costume dramas, you may have seen bellmen on TV. Although we don’t need bellmen now as we can know the exact time on our watch or phone, there’s one place in China that still keeps the tradition. That’s ancient water town Wuzhen. Strolling down the street with the sound of a gong ringing in your ears, you may feel like traveling through time to ancient China.

Now let’s come back to the modern world. Hope this is of some help for you, especially if you are the people who only used the 24-hour clock format and just encountered the 12-hour system.

And hope you like this kind of interesting facts about am and pm as well as ancient Chinese timekeeping methods. If you are interested in any China tours, just leave us a message. We will respond as soon as possible. 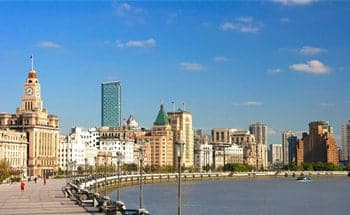