Maoling, located some 15 kilometers to the east of Xingping city, is the tomb of Emperor Wu of the Western Han Dynasty. As at that time the tomb site was in the precinct of Mao Township of Huaili County so the tomb built here for the emperor was known as Maoling. It is now one of the cultural units of national importance under the protection of the state. Emperor Wu of the Western Han is an emperor of great action and deeds in Chinese history. During his reign of 54 years he achieved a great deal with his great talents and clairvoyance, pushing the Great Han Empire up to the zenith of a strong prosperity.

The 2nd year(139 BC) after his succession to the throne he started the construction of his tomb. As the largest of all the Western Han tombs with the longest time of construction it contains the richest treasures and rare objects. According to the record ” Biography of Gongyu. Records of History of the Han”: “ Gold and silver, birds, fish and turtles, cattle and beats, all up to some hundred and ninety kinds and species are buried into the tomb cavity. ” It is said that the jade clothes pieced together with gold thread worn by the emperor, the jade-case and staff and all the reading materials, a total of some 30 volumes which were encased in gold case, are all buried into the tomb too. Looking very much like an inverted bushel the crust of the Maoling Tomb was built of pounded earth, presenting a sense of sedate solemnity. According to an accurate survey the tomb is 46. 5 meters high, measuring 39. 5 meters from east to west and 35.5 meters from north to south at the top and a circumference of 240 meters at the bottom of the tumult. The tomb yard is rectangle in shape with a measurement of 430.87 meters from east to west and 414.87 meters from north to south and the wall is thick as 5.8 meters at the base. In ancient times, there used to have many halls and houses here with tomb-keepers to number some 5, 000 in all. To the southeast of the Maoling Tomb there used to have a county town with a population of some 277, 000, a relatively prosperous town at that time.

In the surrounding areas of the Maoling Tomb there are such subordinate tombs as that of Lady Li and the tombs for Wei Qing and Huo Qubing, etc. The Tomb for General Huo Qubing was enlisted as one of national importance under the protection of the state and in 1958 the Maoling Museum was put up here on the very site. 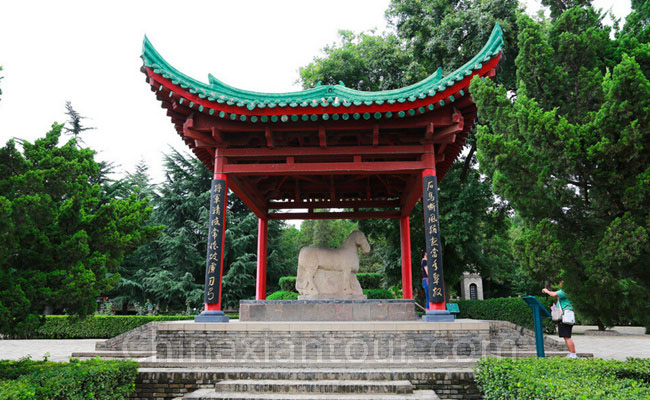 Huo Qubing is a young militarist of the Western Han Dynasty. Following General Wei Qing on his expedition at the age of 18, he succeeded in crushing the Huns by fighting six decisive battles. He crowned as the great general due to his marvelous deeds in his military service. He died young of illness at the age of 24 only.

In commemoration of the marvelous merits of this young commander, Emperor Wu specially built a tomb for him, which was in the shape of the Qilian Mountain and also carved quite some large-sized stone statues and animals as decorations for the tomb. Among these stone carvings there are such famous ones as Flying Steed Stepping on a Hun, crouching and leaping horses, stone-statues, crouching tiger, lying elephant and ox, man seizing a bear, queer beast devouring a sheep and porcupine and fish and what not, a total of 15 pieces. The most renowned one of all is the Flying Steed Stepping on a Hun. This batch of stone carvings, with new theme topics, all vivid and lifelike and chiseled out in simple yet serious style, represents highly the virile, broadened time spirit and the artistic style in the early days of the Western Han Dynasty. So far, they are the most well-preserved masterpieces of large-sized group stone-carvings left over from China’s ancient times.