The Bronze Chariots and Horses in Terracotta Warriors Museum

2000-Year Bronze Chariots and Horses – More Valuable Than Terracotta Warriors, Honored as the “King of the Bronzes” 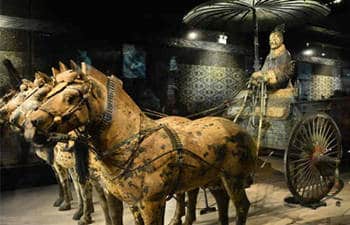 In Xian Terracotta Warriors and Horses Museum, there are two world-famous bronze chariots and horses whose sizes are about a half of that of real chariots and horses. The chariots, horses, and drivers were all made of bronze with paint all over the body, and chariot horses as well as some decorations were made of gold and silver. This is the earliest-discovered, largest, and most well-preserved bronze chariots and horses in the history of archaeology in China. It is honored as the “king of the bronzes” and is currently housed in the Emperor Qinshihuang’s Mausoleum Site Museum.

The funeral pit of bronze chariots and horses was discovered by accident. In June 1978, the archaeological team drilled a gilded trapping made of metal in the soil layer more than 7 meters underground on the west side of the Mausoleum of the First Qin Emperor. It was a metal ornament carved with flowers and used for decorating the horse’s head. Its discovery opened the prelude to the tomb of bronze chariots and horses in the Mausoleum of the First Qin Emperor. In 1980, when a local pit was partially excavated, two large bronze chariots and horses were unearthed in a wooden tomb which was broken when came up out of the ground but got back to its original shape after restoration.

Due to its long history, they were broken into more than 3,000 pieces when unearthed and after nearly 8 years of careful restoration, they were finally exhibited in 1989. These bronze chariots and horses in the Mausoleum of the First Qin Emperor have two rows of cars. One was the “Li Che” (a standing driving car) and the other was the “An Che” (a sitting driving car) both of which were far-back single-shaft two-wheeled vehicles and produced according to the half ratio of real horses and chariots in the Qin Dynasty. A shield was placed on the right side of the carriage of the “Li Che”, and a copper bow and arrowhead hung on the front of the car. And a round umbrella stood on the car with a 91cm-high copper terracotta figure stood under it. More, the driver in the car was dressed in Qin clothes thousands of years ago, with a crown on his head. The texture of the clothes was clear, neat, and decent.

The “An Che” was a saddle car drawn with four horses whose shape was seen exactly like the “Tu” character (凸, it meant an “inverted-T” shape in Chinese characters). It was divided into the front and rear compartments, and the car had a dome-shaped oval cover. The front compartment was for the driver who was supposed to drive with his knees on the ground, and the rear room was for the master. The bronze chariots and horses were lifelike in shape and colorful in decoration, moreover, the ties and harness were all made of gold and silver. They are precious national treasures for their sophisticated workmanship.

The casting of bronze horses was very exquisite for their facial expressions were rich, and the figures were vivid. The horses had different heads and hairstyles and also differed in the heights of the heads. The decoration on the head of the bronze horses was very delicate with an inverted triangular metal sheet on the top of the head of each horse, on which the fine patterns were carved. Also, the harness on the horse’s head was all kinds kept in stock.

Bronze chariots and horses in the Mausoleum of the First Qin Emperor were all cast in bronze, and the weight of gold and silver ornaments exceeded 14 kg. They were made up of more than 3500 parts by various technologies such as casting, inlaying, welding, buckle connecting, living hinge connecting, and different kinds of technical skills such as mechanical connection and processing. The copper wire used for the necklace of precious stones and chains on the horse was only about half a millimeter in diameter, and some were even thinner, representing the brilliant achievements of China’s metal manufacturing process for more than 2,000 years ago.