In Shaanxi, there is a kind of dessert which is very different from that in other places. It’s Crystal Cake.
Crystal Cake is loved by everyone in local, and it can be called Shaanxi pastry endorsement.

The cake tastes superb, with the bright red name marked on it. The cake is sweet but not greasy, crispy and soft, and exudes a rich fragrance of roses. 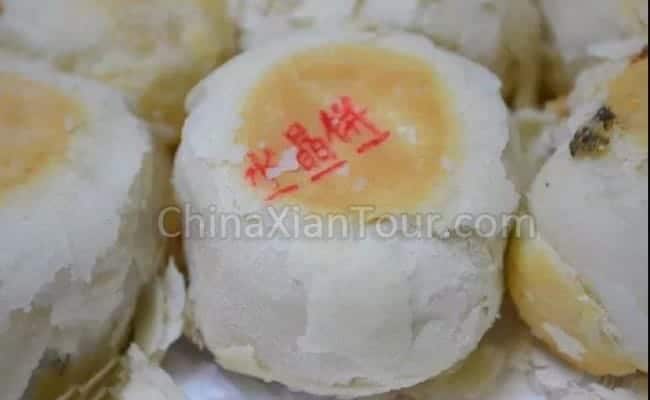 Crystal Cake is the combination of various ingredients, such as white sugar, rock sugar, blue-red slice, pig oil, walnut kernel and rose petals. The blue-red slice is made of orange peel, radish and papaya, which exudes a flavor of orange and roses. Considering that the cake is easy to peel off, it is packaged tightly. The layers of the crust are stacked and will melt in the mouth. The Crystal Cake is a specialty snack in Shaanxi. It is suitable for both the young and the old. Thus, it’s a proper take-away gift for visiting the elderly, relatives and friends.

According to the legend, in Northern Song Dynasty the crystal cake was as a gift sent to the chancellor Kouzhun and it was made by the members at north of Weihe River. At Kouzhun’s 50-year-old birthday, the people who came from different places delivering their blessings to him. Among them, an old man praised him by offering crystal cake while saying that “Kouzhun’s eyes and heart are as bright as crystal”. Therefore, he was distinguished with loyalty and traitors.” We can’t prove the story, but it is an indisputable fact that the Crystal Cake is famous in Shaanxi. As recorded in the book, the origin of the cake was in the eleventh year of Tongzhi, that is, in 1872. The Crystal Cake is 23 years earlier than famous dessert—Daoxiangcun in Beijing.

As the intangible cultural heritage, Demaogong Crystal Cake is a famous trademark of Shaanxi Province and also a model in the northwest snack industry. As a time-honored brand, it has a good reputation, and also has been tasted by generation and generation.

There are nine small, exquisite and lovely crystal cakes wrapped in oily paper and packed in the carton, with a weight of a pound per box. On the cover of the box, there are four children dancing. The three characters of “Crystal Cake” are written in the middle. And the trademarks of Demaogong and time-honored brand are on the top and bottom separately.

Production
The process of making crystal cakes is complicated, and it has to go through many procedures such as stuffing, skinning, wrapping, baking, etc., and the traditional crafts are passed down. The Crystal Cake is not luxuriously packaged, but it is just like the modest Shaanxi people with passion and sincerity.

The Crystal Cake in Shaanxi is like Chinese chess with the same size and appearance, and even the words printed on it. There is no real crystal in the Crystal Cake, but it is famous in Shaanxi and has become a delicious snack that many generations can’t forget. The Crystal Cake owns irreplaceable status in the life of Shaanxi people, which mixes with the faint nostalgia. Nowadays, many visitors who travel to Xian also also take some Crystal Cake as the gift, and they thumb up for this special Xian snack to show their preference.