A city walk is prepared for those tourists who like taking photos, enjoying splendid culture and exploring breathtaking landscapes.

So, we will provide four best urban-walk routes, which are private.

The route map is as follows. ▼

The first two scenic spots of this route are classic, while the last two are the hot spots that have emerged in the past two years.
Saint Sophia Cathedral ▼

The Middle East Railway Bridge is the earliest railway bridge on the Songhua River, which was built in 1900.

It is the first river-spanning bridge in Harbin, and it is also the boundary between Daoli district and Daowai district in Harbin.

Now, the pedestrian bridge for the Middle East Railway Museum had been built, and the railway bridge is beautifully illuminated when night comes.

After crossing the railway bridge, go straight north and you can arrive at the Harbin Grand Theater.

The Harbin Grand Theater is one of the Internet celebrity locations that have become popular in the past two years for its unique architectural style, and it has now become one of Harbin’s new landmarks.

The second route: the connection of some churches There are many churches in the historical buildings left over from Harbin.

Various religions including Eastern Orthodox, Catholicism, Christianity, Judaism, Islam, and so on have left their marks here.

It is a very good way to understand the history and culture of Harbin through the churches.

This route starts from the St. Alekseev church at the intersection of Gogol Street and Gexin Street and then goes to Gogol Street, Xidazhi Street, and finally the Harbin Station.

You can walk up to Gogol Street to enjoy the Russian customs to Xidazhi Street, then turn right to the affiliated hospital of Harbin Medical University.
There are three churches near the hospital: Orthodox Church of the Virgin, the Christ Church Lutheran, and the Sacred Heart Cathedral.

Orthodox Church of the Virgin▼

After that, from the affiliated hospital of Harbin Medical University to the Heilongjiang Provincial Museum, and then to the Holy Iveron Icon Orthodox Church in the North Square of Harbin Station. Chinese Baroque is a unique combination of Chinese and Western architecture by integrating the style of the “Baroque” style into traditional Chinese architecture.

This kind of architecture has relics in many cities such as Harbin, Wuhan, and Beijing, but the largest and most complete building complex is still in the old Daowai district of Harbin.

The buildings in the old Daowai district are in concentrating distribution and the streets are relatively narrow.

The buildings in the old Daowai district▼ This is an ice and snow route.

In winter, there are many entertainment projects along the Songhua River, including snow circles, slides, ice skating, sleds, and so on.

A cruise ship was frozen on the river▼

The highway bridge in the Songhua River▼

Bubbles in the iced Songhua River▼

Go west and when you are about to reach the Songhua River Highway Bridge, the north bank of the river is the ice rink where the “Ice and Snow World” takes its ice.

Huge blocks of ice make you feel a bit like you’re in an ice world.

Walking along the north bank of the river from the ice rink to Sun Island, there are also some leftover Russian villas there.

Finally, you can take a cable car from Sun Island back to the south bank of the river– Central Avenue.
These four routes link up the ice and snow entertainment projects and the human history of Harbin, so, if you have enough time, you can visit all of them.
The atmosphere at night will be better, especially at midnight– when the street is very quiet, you can hear your footsteps crunching on the snow.

You should wear more clothes when you come to northeast China in winter, otherwise, you can’t walk your routes at all, because you will freeze as soon as you go out.

Besides, the camera’s temperature should be kept in a stable state, the mobile phones should be tucked in your pocket, and it is best to carry a power bank with you.

Finally, we wish you all a good time! 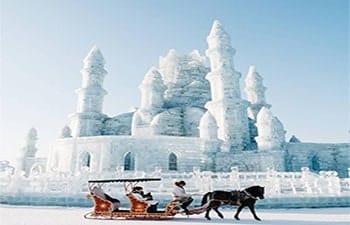