Shaanxi History Museum is one of the most highlight attractions in Xian City area. For tourists who love history, the museum is the must visit in their Xian tour. As the first large scale modern museum and a national 4A scenic area, Shaanxi History Museum has large quantities of collections that range from remote antiquity (when human society was in initial stage) till 1840 (when modern history of China began). Xian is a well known capital city in China. in history there were the Zhou, the Qin, the Han, the Sui, and the Tang Dynasties set Changan (today’s Xian) as their capitals.

According to statistics, there are 370 0000 pieces/sets of cultural unearthed in Shaanxi Province kept in Shaanxi History Museum. Among the collections, 762 pieces/sets were evaluated as the Grade One cultural relics of the state. And 18 of the grade one cultural relics were regarded as the national treasure. In this blog we’d like to share 10 of the most precious relics in the museum. 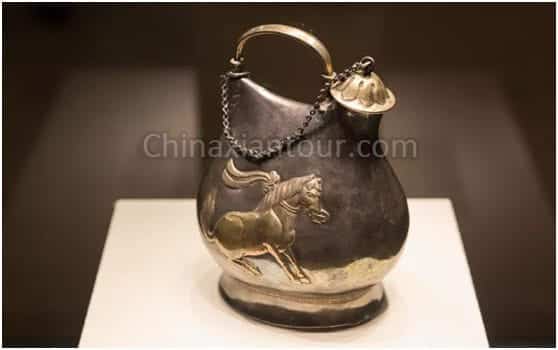 In Shaanxi History Museum there are two pieces of cultural relics are forbidden to exhibit in foreign countries. This is one of them. The horse in the jar is dancing horse which was especially trained for dancing. After the An Shih Rebellion, the dancing horse art gradually disappeared. So later generations could only see the dancing horse record in document. The excavation of this jar represented the actual scene of horse dancing. And it is the only geological material which proved the fact that on the birthday banquet of Emperor Xuanzong, a dancing horse performed the show to congratulated the emperor’s birthday. 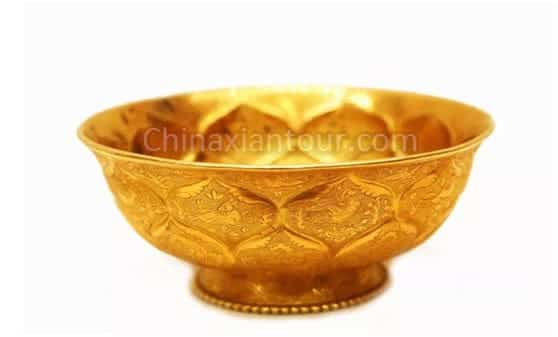 The bowl was discovered in 1970 in Hejiacun Village of Xian city. There were two bowls unearthed in one time. The bowls showed how developed the silver & gold wares casting technique was in northern China in 1000+ years ago. According to historical record, these two bowls are the most delicate gold bowls. And the gold bowls were mainly used by the emperors. So the Gold Bowl With Yuanyang & Lotus Pattern is rather precious in experts’ mind. 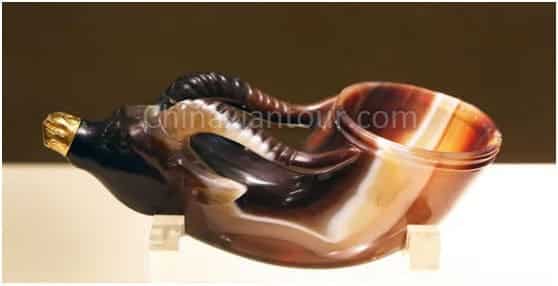 The cup is the other cultural relics in Shaanxi History Museum that is forever forbidden to exhibit in foreign country. The whole cup looks like a horn of beast, on the front part of the cup there is carved with a cattle head. The mouth of the cattle was inlaid with gold. Experts think this agate cup is the most delicate jade carving artwork of the Tang Dynasty. Theoretically seal of Empress is less authoritative than that of the Emperor. While in Chinese history there were some empresses who were as influential as emperors: Empress Lv Zhi of Han Dynasty, Empress Wu Zetian of Tang Dynasty, and Empress Cixi of the Qing Dynasty. Cultural relics related to these great women would be much more precious. The empress’s seal in Shaanxi History Museum belonged to Empress Lv Zhi. Lv Zhi is the wife of Liu Bang who founded the Han Dynasty. In his husbands way to establishing new dynasty, Lv Zhi did lots of effort. And after Liubang died, the empress ruled the country for 16 years behind the scenes. The seal was unearthed from Maoling, tomb of Liu Bang. Ancient Chinese people had the habit to burn incense to fresh air in room or give clothes some pleasing fragrance. In the West Han Dynasty, the Emperor Wudi gave a gilt bronze incense burner to his elder sister as gift. And the sister is the well known Pingyang Princess, the wife of the great general Wei Qing. In 1981, that imperial gift was unearthed in Maoling Mausoleum. This ewer is the best of the best among Yaozhou Kiln productions. It is highly praised for both its delicate design, excellent artwork, and the skillful use of physical principles. By present, this bottle is the most grand and the most delicate one among all silver bottles of the Tang Dynasty which were excavated. The parrot on the bottle body is rather vivid. And the bottle deliver the atmosphere of happy event. Oil-spot is a kind of special black ceramic glaze production of the Song Dynasty. The most remarkable feature of this bowl is the silver grey dots on the sooty face. The dots like the beautiful starts in sky. The brass lamp was made in like a goose has a fish in its mouth. The opening part of  lampshade can be adjusted regarding direction and width. So the lampshade can not only protect wind but also adjust the lamp’s lightness and the lighting direction. The most surprising thing is that the lamp could solve its pollution itself. The lampblack could travel to inside of the goose’s stomach. And in the stomach there is a little plate keeping some water. So the lampblack would blend into the water instead of polluting the air in room.