How Were Terracotta Figures Made in the Qin Dynasty

How Were Terracotta Figures Made in the Qin Dynasty

Terracotta Warriors and Horses is the most magnificent archeological discoveries of the 20th century. It locates at east urban of Xian city, you can either take the public bus or take a taxi/ rent a car from travel company to go there. And the car riding takes 45min-1hour from downtown Xian to Terracotta Warriors. The large numbers of the terracotta figures and its firing technology shocked experts home and abroad.

Terracotta Warriors Tour is the top thing to do for any tourists to Xian. by visiting there one will witness the grand plan of it. While learning about how these terracotta figures were made are also of importance if you want to learn some hidden things of Terracotta Warriors.

The bigger the figures are, the more difficult to cast. According to history record, in the beginning when the artisans got the job, they made the figures in the traditional way: made a solid figure and put it into firing cave to heat. But the result sad all artisans. That forced the artisans to find other cast method. Then they tried cutting the arms, legs, and heads off, and emptying the figures inner side. They fire the different parts of the figure respectively and when taking those parts out of the heating cave they put them together. The artisans succeeded that time!

Besides firing the arms and head respectively, the body of the Terracotta figures were also divided into two parts when making flan. See the picture below, taking the red mark as dividing line, the front part and the back part of the body were butted together. 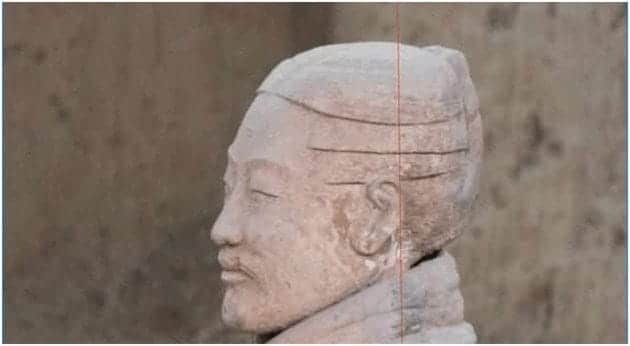 After finding this technique, the Terracotta figures could be made in large scale. The first step is to make rough body – a cylinder like people’s body. Then carve the cloth pattern. 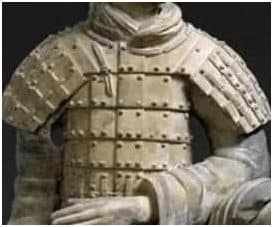 When the body part finished, artisans would begin to make the arms, legs, and heads. Some details of the figures were put onto the body and some detail parts of the body were carved. For example, the moustache were probably pasted to the face, and the eyes were carved. When the firing of separate parts of the figures finished, these parts would be put together and then paint the figures with different colors. The terracotta horses were made in the similar process. When the terracotta figures were discovered, they are not complete figures tourists see. Instead, they were firstly restored and repaired by experts. (Pictures are from internet)